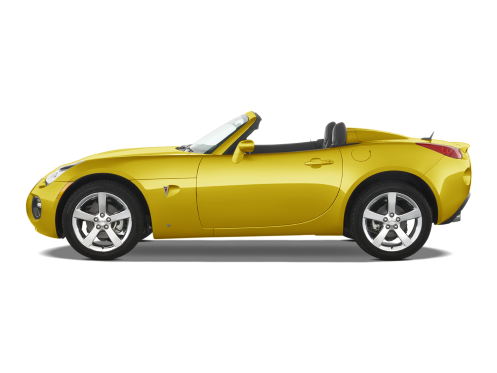 The Pontiac Solstice is a sports vehicle that was built by Pontiac. Debuted in 2004 at the North American International Auto Show, the Solstice roadster began making in mid-2005 as a 2006 model year. The exterior design of the Solstice is similar to the 2002 Solstice concept car that foregoes it.

Following the 2008 economic crisis, GM abandoned the Pontiac division. Making ceased with the closure of the Wilmington Assembly factory in 2009.

The Pontiac Solstice comes in two trims levels: base and GXP. The base Pontiac Solstice is equipped with a 2.4-liter four-cylinder engine that produces 177 hp and 166 pound-feet of torque. Paired to the standard five-speed manual gearbox, its 0-60-mph time is rated at 7.7 seconds. The GXP's 2.0-liter turbocharged engine produces 260 hp and 260 lb-ft of torque and its 0-60-mph time is rated to six seconds. It also comes paired to a five-speed manual transmission. A five-speed automatic is available for either powertrain.

Some of the common problems or complaints owners have about the Pontiac Solstice are:

Below you can find the owners manuals for the Solstice model sorted by year. The manuals are free to download and are available in PDF format. Is is recommended to check the owners manual corresponding to the correct year of your Pontiac Solstice to solve the problems or to get insights about the car.